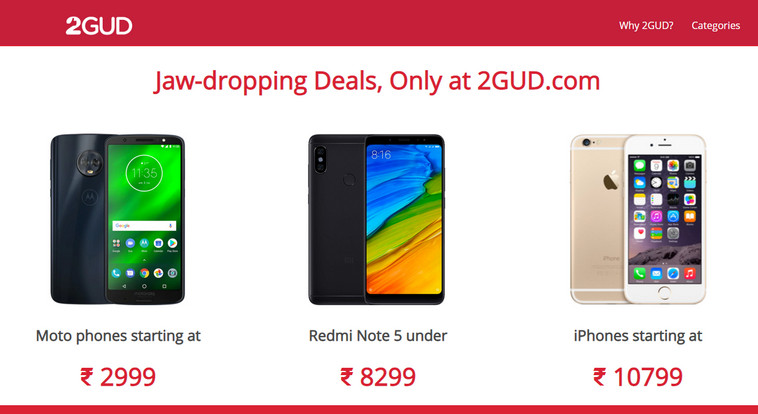 Many of the time we don’t have enough money to buy our dream smartphone or other products that we want. That’s where refurbished products comes into play. We can already find a bunch of refurbished smartphones on Amazon and Flipkart. But Flipkart has recently announced a whole new service and website called 2Gud where users will be able to find a variety of refurbished smartphones and other products at cheap price. It has already launched the mobile version of the 2Gud portal. But the desktop version of 2Gud is still not available. However, that too will be available in few days.

2Gud is a web portal where one can find a bunch of refurbished mobiles, laptops, tablets, smartwatches, accessories and 400+ more categories of products at best price. All the devices are certified & graded by professionals and comes with 3 to 12 months of assured warranty and easy 10 day return policy.

As a deals website we must mention that this new portal called 2Gud which has been introduced by Flipkart will also offer a separate section for its jaw dropping deals on various smartphones and other products.

The Product Quality Indicators At 2Gud

Flipkart itself has told that, each products goes through a bunch of quality checks before listing them on 2Gud website. And there are several product quality indicators as well, such as ‘Like New’, ‘Superb’, ‘Very Good’, ‘Good’ and ‘Okay’. And sellers won’t be able to directly interact with the buyers or vice-versa. 2Gud itself will check all the products and then list them on the portal so that no sellers can sell faulty product or try tricks to fool buyers.

2Gud: The End Of Ebay India

Few years back, the American e-commerce giant sold it’s Indian portal to Flipkart. But, Flipkart is now decided to fully stop the Ebay India portal and completely move to the 2Gud portal. The home page of Ebay.In also shows the introduction banner of 2Gud at their homepage. Though, some links are still available to access for the old users. But, very soon, the whole Ebay.In site might redirect all it’s visitors to the 2Gud.com website.