Miss Call Alert Airtel: How To Activate For FREE or Deactivate? 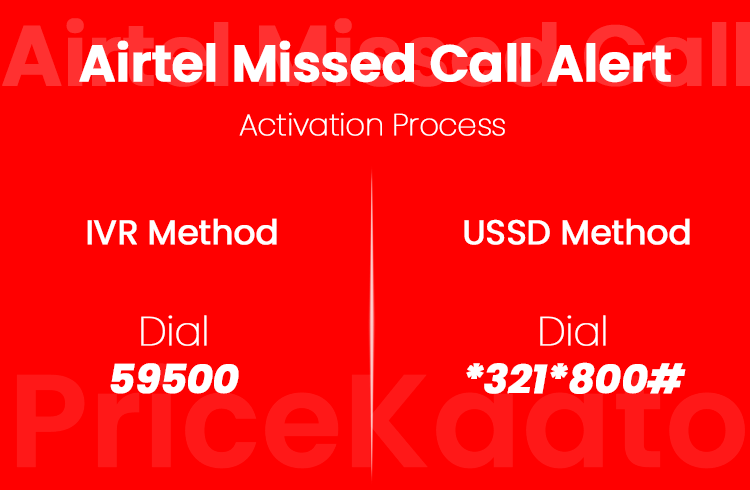 You can activate the Missed Call Alert service on Airtel sim either via IVR or via USSD code. See the steps below to quickly turn on this service on your Airtel number and get alerts as SMS for the calls that you missed whenever you were out of network or switched off:

Dial 59500 and activate directly from the call.

Airtel Missed call alert service is free for first 30 days. Once that period is over, you need to pay Rs 30 per month to make this service remain activated on your Airtel number.

In case you just want to use the first 30 day for free, you can deactivate the alert service and no money will be deducted from your balance. To deactivate Airtel missed call alert service from your number, look at the beginning of this article where we have showed you the method to deactivate miss call alert on Airtel using the USSD code method. You just need to dial that USSD code and select the options and it will be deactivated instantly after your confirmation.

After the arrival of Reliance Jio, the whole scenario of the Indian telecom industry has changed very rapidly. A lot of telecom operators such as Tata Docomo, Virgin, Aircel, etc have shut down their entire business and Vodafone and Idea has merged together and formed into Vi to survive in the battle.

But Airtel is still operating with a huge customer base and it has survived the battle very well. Shut down of other telcos has resulted more customers for the industry leaders like Jio and Airtel.

Before the merger of Vodafone and India, people thought Vodafone is also going to shut down their business as they had to pay a lot of money to the government to stay in business. Due to this fear, a lot of Vodafone customers have moved to Jio and Airtel which was beneficial for these two telcos.

From now on, these two telcos (Jio and Airtel) are likely to gain most of the market share and be profitable. So for the large number of Airtel customers we have brought the process of activating miss call alert for Airtel users.

Why Missed Call Alert is So Important?

Many of the time, we experience low battery on our phone during work hours or when someone is about to call us for an important talk. But due to battery drain or no network availability, we become unable to answer those calls which are very important to us.

In this case, the missed call alert comes into play. Once you activate miss call alert Airtel users, you will get an SMS from Airtel which will contain the number of the caller and when he/she called you.

By receiving this Airtel missed call alert, you will be able to know who called you and when. And accordingly you can call them back at your own pace. This amazing service by Airtel prevents you from missing calls that are valuable to you.

Simply activate this alert on your Airtel number by watching the process at the beginning of this article and stay stress-less when you are out of network or your phone is switched of due to unwanted circumstances like accidental switch off or no-battery issue.

It also helps you when you are travelling to different places. In some areas, Airtel provides great network coverage, but unfortunately, there are some areas as well where you won’t get stable network or sometime you may be out of network completely. Picking your phone up on the air won’t help as it is seen in movies, but if you have activated Airtel missed call alert, it will definitely help you in knowing who called you during when you were out of network coverage.

Hope you guys liked this article about Airtel miss call alert, you you really did enjoy it, comment down in the box below. You can also ask your question here! I will surely reply to your comment.

How to Change Registered Mobile Number On Signal App?

How To Send View Once Media On Whatsapp? [On Android & iOS]

How To Play BGMI On PC [Without Error Code: Restrict-Area]