Airtel & Vodafone Outgoing Validity Expired: Here’s What To Do Now?

Including me and millions of other Airtel & Vodafone users, you must have received an SMS stating that “Alert! Pack validity for Airtel or Vodafone no will expire in some days and outgoing services will stop. Recharge with RC35 or more for continued services“. It’s really a shocking message to all of us. So, in this article, we will discuss if it’s real or fake and what steps to take as a prepaid customer of Airtel and Vodafone. So, without any further talk, let’s get started! 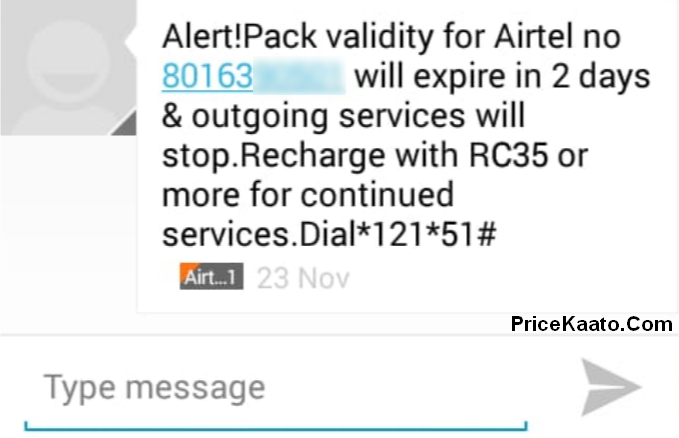 Unfortunately, the answer is YES! The message you got was 100% real and it was sent from the official Airtel and Vodafone itself.

In the past few years, Jio has changed the whole concept of calling, mobile data and SMS usage. Now almost everybody who owns a 4G smartphone uses at least one Jio connection. Apart from cheap data, users also opt-in because of it’s unlimited free calling benefit.

But, this customer behavior is continuously putting pressure to other telecom networks such as Vodafone and Airtel who used to be the industry leader a few years back. With increasing losses, they have taken this action to stop the “lifetime free incoming calls” facility and from now, prepaid users will need to recharge regularly for continued services.

When The Validity Of Outgoing Calls Will Expire?

Within this period, users will need to recharge to extend their validity further. The bad news is, none of the low price recharges come with unlimited validity. So, it will be really a big issue for those users who’s requirement is low. You will need to pay continuously in order to enjoy continued services from Airtel and Vodafone.

Which New Plans Are Coming For The Users?

Whats The Reaction Of The Users?

Users are very angry on these two telecom companies and they think it’s anti-consumer move from Airtel and Vodafone. People are already leaving angry comments on various websites and Consumer Compliants Court.

Most of the users want to port out to other operators. For those who don’t have much balance left on their account can easily port out. But for those who have more than a hundred, it’s an issue. They need to recharge a minimum of Rs 35 in order to consume the balance within 28 days of validity.

Why Airtel & Vodafone Took This Action?

The main reason behind taking this action is, most of the Jio users use Jio to make outgoing calls as it’s free there, but they also use Airtel or Vodafone as their second connection in case Jio’s network is not available and mostly to receive calls from others.

But in order to make these connections live, Airtel & Vodafone needs to spend money. As the users are not spending enough on Vodafone and Airtel, these two operators took this action to let those users go. This action will improve its average revenue per user (ARPU).

What’s The View Of TRAI In This Matter?

I’ve seen comments where users are requesting the Telecom Regulatory Authority of India (TRAI) to stop this action. But no report has been published so far about the response of TRAI regarding this matter.

So, what’s your view regarding this issue? Are you OK with this? Or you are going to port out to another operator? Please let our readers know your reaction on the Airtel Vodafone outgoing and incoming call validity expiry issue in the comments section below!