ZEE5 Anniversary Offer: Get Flat 50% OFF On Annual Subscription

One of the biggest Indian OTT platform owned by ZEE group is celebrating it’s 3 year anniversary and it has launched Zee5 Anniversary Offer where users can grab flat 50% discount on the annual subscription of Zee5. 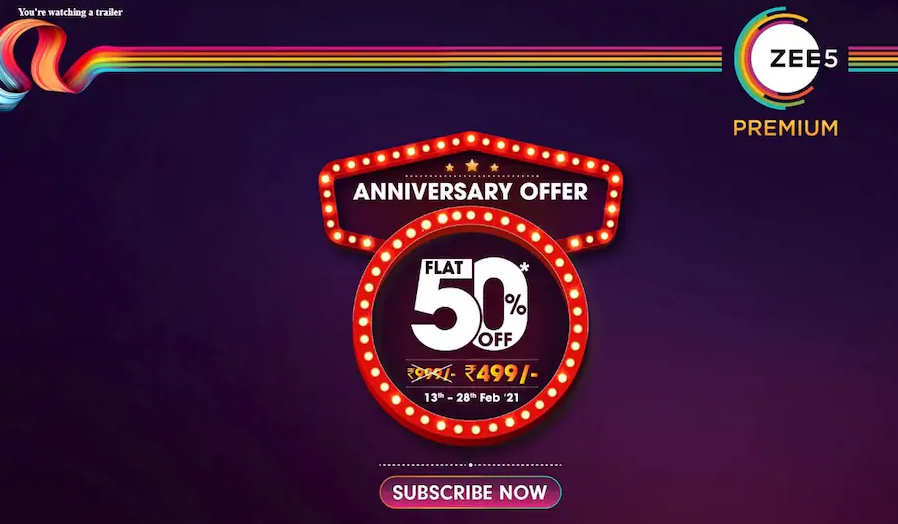 Zee5 is currently offering a wide array of OTT contents such as movies, daily soaps, TV shows, news, etc in different regional languages. Apart from that, it has also integrated Zee5 Play on it’s platform where users can play various games online on Zee5.

Under the ZEE5 club pack, subscribers can enjoy their favorite tv shows online before the actual telecast. It also let users see Zee5 on two different screens at a time.

Zee5 Anniversary offer is going on as Zee5 reaches 3 years. Under this offer, you can avail flat 50% discount on the annual subscription of Zee5 Premium plan. Generally the price of this plan stays at Rs 999. But now, you can grab it at Rs 499 only. The offer will expire on 28th February 2021.

Hope you guys liked this Zee5 Anniversary Offer. Please share this deal to your friends who might enjoy watching Zee5 web series.