Amazon has come up with its all new Honor Band 4 quiz. You can participate in this quiz from your mobile on Amazon app and get a chance to win a brand new Honor Band 4 smart watch. You need to answer all questions asked in the quiz correctly in one session. But don’t worry, we have added all the Amazon 7th February quiz answers here so that you can easily answer them correctly and stand a chance to win the Honor Band 4 in this Amazon quiz contest.

Only 1 winner will be selected via lucky draw from the participants who will give correct answers to all the questions. And the winner will be announced on 28th of February 2019. After validating the identity of the winner, prize which is a Honor Band 4 health band, will be sent to given address.

To play the Amazon 7th February quiz contest, you just need to download and install the Amazon app from Google Play Store. After installing, just sign in to your account or create a new account if you don’t have any. After that, on homepage, you will see a banner containing the introduction of the Amazon 7th February quiz. Once you click on the banner, you will see a button to participate in the game and give answer to the questions asked. 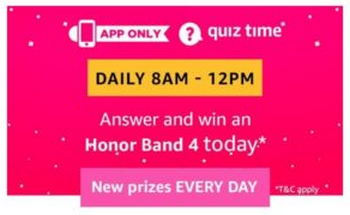 Wolverine, also known as ‘Gulo Gulo’ is the member of which animal family?
> Weasel

The collective noun for a group of giraffes is a ‘___ of giraffes’. Fill in the blanks.
>Tower

Churchill, Sherman and Panzer and the names of ______?
>Military Tanks

Which ancient empire was ruled by Xerxes the Great in the fifth century BC?
>The Persian Empire

Which nation was the first to give women the right to vote?
>New Zealand